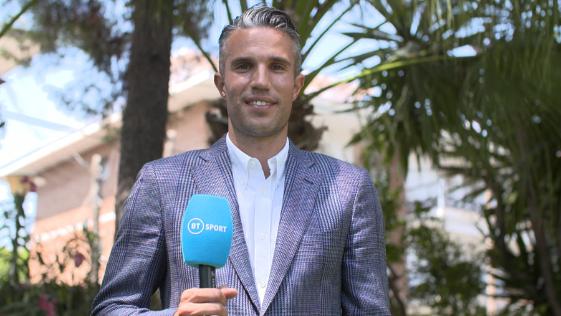 The former Arsenal and Manchester United striker, who hung up his boots at his boyhood club Feyenoord in May, will sit alongside a roster of pundits that include his old club team-mates and ex-Premier League rivals: Rio Ferdinand, Paul Scholes, Owen Hargreaves and Steve McManaman.

Joining BT Sport is a fantastic opportunity for me,” said Robin.

“I can’t wait for the new season to start both domestically and in Europe and I look forward to this new challenge which takes me off the field and into the studio for the first time.”

Alongside his record 50 goals in 102 appearances for his country, RVP secured back-to-back Premier League golden boot awards for the 2011/12 and 2012/13 seasons, netting 190 times in all competitions during his spell in England.

Simon Green, head of BT Sport, added: “Robin is going to be a brilliant addition to our BT Sport team.

“A prolific striker and proven leader for two of the Premier League’s biggest sides, as well as on the international stage, his pedigree in the game of football is nothing short of world class.”