Sky Campaigns for Cameras in Court 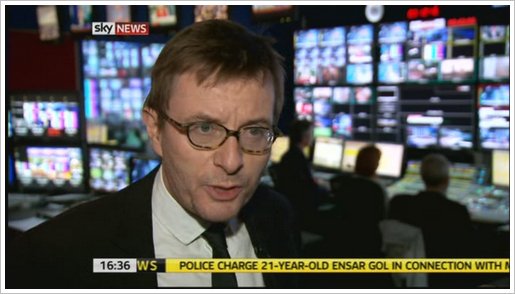 The Head of Sky News has sent an open letter to the Justice Secretary urging him to take action to allow TV cameras into courtrooms.

In January 2010, John Ryley said in a speech to the Cambridge Union Society on television and democracy: “Sky News will be campaigning hard to lift the ban on cameras in courts. We will explore every opportunity to mount a legal challenge against the ban on cameras, launch a public petition, as we did for the Leaders’ Debates, and remind our viewers, listeners and website users about the campaign every time we report from outside a court with no pictures of what has taken place inside.

“It’s precisely what you’d expect from a truly independent news organisation able to push boundaries and challenge the status quo.”

Today, John Ryley renewed calls to allow cameras in the courts in an open letter sent to the Justice Secretary Ken Clakre:
Dear Mr Clarke,
The controversy over sentencing policy following the recent riots has once again illustrated the lack of transparency in our judicial system. The public is unsurprisingly confused by the discrepancies in some of the sentences handed down to those involved in the rioting and looting.

I believe that if television cameras were allowed to broadcast the remarks made by judges when they pass sentence, it would go a long way to making the process more transparent and would dramatically improve public confidence in the system. This video would also of course be shown on websites and other digital platforms.

You will recall that Sky News, along with the BBC and ITN, made this proposal when we met you last year. We also suggested televising judgments in civil cases. At the time you said you were interested in the proposal. You added that you “believed it was consistent with the Government’s commitment to enable the public to better understand decisions that may affect or interest them hold politicians and public bodies to account…”

You indicated that you intended to consult the various interested parties before you could contemplate a change in the law. Eight months have now passed, but the law remains in place and television cameras are still excluded from every part of the judicial process in England and Wales, except the Supreme Court. Incidentally, you may have noticed that Sky News has been streaming the proceedings of the Supreme Court live on its website and they have been viewed by an average of 90,000 individuals a day.

We believe it is time that television cameras were allowed into all courts, starting with the televising of sentencing remarks and judgments. The audio would also be available to be used in radio news and current affair programmes and online.”

Since this is a matter of public interest I am releasing this letter to the Press Association.

I look forward to hearing from you.

Earlier this year, Sky News begun streaming live video coverage of the UK Supreme Court on its website, which attracts around 90,000 visitors a day..

Update 20:19 – Sky Sources are saying the Prime minister is expected to announce tomorrow that some court proceedings will be televised following the campaign..